This is my twenty-third year of teaching, and I think I may have finally figured out what I am doing. Many years ago in my student teaching, I was taking an educational philosophy course, the defining question of which was “What is the purpose of teaching?”

I was doing my student teaching in Guatemala City, Guatemala. Each day I rode the bus to school, and we passed by large, mansion-like houses surrounded by high walls, on top of which guards holding machine guns stood watch. We also passed by other houses which were little more than wooden shacks with tin roofs and chickens wandering in and out of them.

While I was living in Guatemala, I learned about how the United States had been involved in destabilizing the Guatemalan government during the seventies and eighties. The freely-elected government had been working to improve the rights of indigenous Guatemalans. Seventy-two percent of the land in Guatemala was owned by two percent of the people, most of whom were tied to an American-owned fruit company.[1]

My Spanish teacher, a kind and gentle Guatemalan woman named Elbanora, told me about this. I was too young to understand everything I was experiencing at that time, but I thought a lot that semester about what the purpose of education was and how education could change the world for the better. In my education class that semester, we had to write a final paper that answered the question “What is the purpose of teaching?” I don’t remember what I wrote, but I have thought about this question a lot throughout my teaching career.

I thought about it a lot in my first teaching job out of college when I taught English and P.E. at a little private school in Ohio. During those first few years of teaching, I think that I would have said that the purpose of teaching was to help my students to express themselves and to be playful, curious, and courageous.

This question stayed with me as I taught English and logic for over a decade in a private, liberal arts school in Lexington, Ky. Through teaching logic to my students, I began to realize how important it is to teach students how to think so that they can critically analyze the messages they receive from their culture every day.

During that time, I also got my master’s degree in educational leadership at a Presbyterian college in Georgia. That program taught me to cultivate all of my students’ human capacities in the classroom—their intellectual, emotional, social, and aesthetic capacities. The program taught me that this is part of what it means to honor the image of God in every student. I think that if someone had asked me “What is the purpose of teaching?” during that time, I would have said that the purpose was to teach my students to think critically and to express the image of God. These were good answers, but I sensed that there were other answers to this question that I did not yet fully understand. 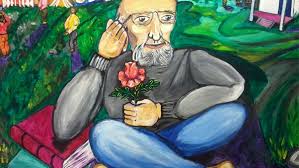 This is a drawing of Paulo Freire. Unfortunately, I don’t know the artist.

This inspired me to return to graduate school to study philosophy. I eventually wrote my dissertation on education and justice. One of the educational philosophers I focused on was Paulo Freire, a Brazilian philosopher who wrote Pedagogy of the Oppressed.  Paulo argues that the purpose of teaching is to help students become more human together so that they can resist the forces of dehumanization in their lives.

To be human, Freire argues, is to reflect on one’s life; to think about how the world could be transformed for greater freedom, beauty, and justice; and to act on these ideas to change the world for the better.[3] This is the right of everyone, not just a few. Freire taught literacy to the exploited farmworkers in his country so that they could pass Brazil’s literacy tests and vote. Freire wanted to empower the workers to transform their world into a more humane place[4].

This really angered some of the Brazilian authorities. They imprisoned Freire for a while for his pedagogical malfeasance and then “kindly” invited him to live in a different country or to face the consequences. [5] Freire lived in exile in Chile and also the United States for many years. [6] Apparently some people are very threatened by the idea that education should help all of us become more human together.

You would think that writing my dissertation on education and justice would have finally answered for me the question “What is the purpose of teaching?” But this question stayed with me after I defended my dissertation and began teaching at a new college. One of the courses I teach is Education for Social Change.

We discuss Paulo Freire’s ideas a lot in this class. As we have discussed humanization and dehumanization, my students have become increasingly vocal and active. They talk to each other a lot; they want to know each others’ opinions. They want to know my opinions. They wonder why more people don’t know about humanizing and dehumanizing education. Many of them are going to be teachers in the future, and as their final class project, some have designed units “Paulo Freire style” in order to practice teaching in a humanizing manner. It is delightful to watch this process.

It is also really uncomfortable sometimes. Like the day when one of my students graciously but firmly suggested to me that the current syllabus schedule was too much, and she invited me to reflect on how I could arrange it to be more conducive to student learning. She was right. Or there was the time in class when we were discussing humanization, and one of my students asked me, “Have you ever dehumanized students?” He was genuinely curious. His question prompted me to reflect on my past failures as a teacher and to speak honestly about them. This was both good and painful.

I noticed something else this semester. As my students became more reflective and active, their growth invited me to become more reflective and active as well. I realized that while I am really good at reflection, I am not as good at action. I decided that I need to get more involved in local political organizations. I also realized that while I strongly believe in students taking an active role in class, I still too often teach in a way that encourages passivity.

I am working on changing this. As I have reflected on the ways my students and I have changed together, I realize even more that humanity is not something we are born with fully developed. It is something we achieve through exercising love and the power of being in just relationships together.This increases our communal power To Be.

In his book Love, Power, and Justice, Paul Tillich suggests that we often think the purpose of education is to help students become well-adjusted to society.[9] Tillich points out, however, that if society actively discourages the being of individuals (i.e. by treating them as objects rather than as humans or by denying them the full development of their human capacities), then by teaching students to be well-adjusted to such societies, we are actually teaching them to be less human. We are decreasing their power To Be.

This has got me thinking a lot about teaching my students how to be maladjusted to live better lives. As I teach my students how To Be, I teach them how to be maladjusted to everything in society that would dehumanize them and try to destroy their being. Like the Guatemalan and US governments did to the indigenous Guatemalan people. Like the Brazilian government did to Paulo Freire and the Brazilian farmers. Like people and institutions do to us when they suggest that certain certain kinds of people are better than others. Like when they intimidate people during voting. Like when they act as though economic profit is more important than peoples’ sacred land and their clean drinking water. Like when they imply that the only real purpose of education is to get a job to keep the economic machine running.

I want to teach my students to be maladjusted to this kind of thinking. As more of us become maladjusted, the more we will be able to resist the forces that destroy our communal being. I don’t think I will ever completely answer the question “What is the purpose of teaching?” But after twenty-three years of teaching, I think I might be headed in the right direction.

[3] These ideas are especially evident in chs. 1-3 of Freire’s book Pedagogy of the Oppressed (The Continuum International Publishing Group, Inc. New York, NY. 2006) as well as in his book Pedagogy of Freedom Ethics, Democracy and Civic Courage (Rowman and Littlefield Publishers, Inc. Lanham, MD:  1998, pg. 52-53.)

[7] This idea is influenced by Paul Tillich’s book Love, Power, and Justice. For a fuller description of these ideas, see my previous post “The Politics of Force and the Strange Work of Love”.

[8] I am capitalizing the phrase “To Be” here because by this phrase, I mean more than just mere existence. I mean the power to be fully human.

16 thoughts on “Teaching My Students to Be Maladjusted: What I’ve Figured Out About Teaching So Far”