When U.S. presidents behave badly, it is quite common for people in their own party to find ways to excuse the president’s behavior.

This has certainly been the case with President Trump. Trump’s character is marred by very public instances of infidelity; lying; shady business deals; racist and sexist comments; cruelty to immigrant families; chaotic leadership; and a consistent tendency to abuse the power of his office for personal gain, to name a few of Donald Trump’s besetting sins.

While an increasing number of Republicans, even high-ranking Republicans, have spoken out publicly against Trump, there are still a great many Republicans who support him. Among these, unfortunately, are a large number of Christians.

As a Christian, this greatly concerns me. It concerns me even more when I hear Christians, as I have often heard during Trump’s presidency, excuse his egregious behavior by saying, “Sometimes God uses wicked rulers to accomplish His goals.”

This excuse is troubling to me for many reasons.

One of the primary reasons it is troubling is that people who use this excuse seem to use it as a justification to support the President and to remain silent in the face of his malfeasance.

This does not make any sense.

One of the most obvious reasons it doesn’t make sense is that the people who excuse Trump’s behavior because “God sometimes uses wicked rulers to accomplish His goals” are often completely intolerant of and vocal about the supposed wickedness they see in Democratic presidents.

For instance, if someone is a Democratic president and supports supposedly “wicked” ideas (wicked according to some folks) like increasing the minimum wage, improving the funding to public schools, passing gun safety laws, and safeguarding the rights of LGTBQ folks and other minorities, this apparently is not the kind of “wicked ruler” God uses to accomplish his goals.

But the “God uses wicked rulers” excuse is troubling for another reason.

The Old Testament is replete with stories of kings of Israel and Judah who acted badly and who were called to account because of it. Frequently the actions of these kings had dire consequences on those around them.

One of the most memorable examples of this is King David. David rose to fame when, as a young shepherd boy, he fought and slew the giant Goliath, who threatened his people. David, understandably, became an unofficial leader of this Israelites after this victory, a path which eventually led him to be king.

And while David started out as a man after God’s own heart, he eventually grew too big for his britches and did a bunch of stupid things, one of which was having an affair with a married woman named Bathsheba, during which time he got her pregnant and then arranged for the murder of her husband Uriah (after which David married Bathesheba) so that he could cover up his malfeasance.

God did not approve.

He sent the prophet Nathan to tell David an allegory about a rich man who steals and slaughters his poor neighbor’s beloved lamb for a dinner feast (despite the rich man having access to all sorts of fine food). In the story, David recognized his profound wickedness and repented, at which point God forgave him.

Nevertheless, David’s wickedness negatively affected his entire family, eventually leading to the death of David and Bathsheba’s newborn son; the rape of one of David’s daughters by one of his sons; and the death of David’s son Absalom. (For David’s story, read 1 Samuel 16 through 1 Kings 2.)

And this is a pattern that is repeated several times in the Old Testament. King David’s son, Solomon, follows in his father’s footsteps and becomes the King. Early on in his kingship, God visits Solomon in a dream and tells him that he can have anything he wishes. Solomon rightly asks for wisdom in order to be a wise king and rule his people well.

And then Solomon got too big for his britches and became incredibly licentious (700 wives and 300 concubines-worth of licentiousness) and idolatrous. He lost his way; forgot the path of wisdom; and the result was the eventual fracturing of his kingdom. (See 1 Kings 1-11.)

And I could tell other similar stories—like of King Ahab who killed a man name Naboth to steal his vineyard. And God sent Elijah to prophesy that Ahab would die a violent death because of his unrepentance. (Ahab was shot by a stray arrow in battle, and dogs licked his blood while he died). (See 1 Kings chapter 16-22.)

Or I could tell you about a wicked king named Eglon who was so oppressive to his people that they cried out to God. And so God sent a prophet Ehud who stabbed Eglon in the stomach and left him to die, only no one discovered Eglon’s body for a while because his servants thought he was relieving himself in the restroom and didn’t want to disturb him. (This story is for real in the Bible—see Judges 3).

And I could go on, but the point is that when people say God sometimes uses wicked rulers to accomplish his purposes, they need to be very careful about what they mean by that phrase.

The Bible certainly shows God working His plan and sometimes using the wickedness of kings, in spite of them, to accomplish good ends. But the wickedness of the rulers always comes at a heavy cost to themselves, their family, their people, and the kingdom they rule.

And God always sends prophets to rebuke such rulers.

And this should give anyone pause who uses religion to excuse wicked rulers or to remain silent in the face of their injustice. 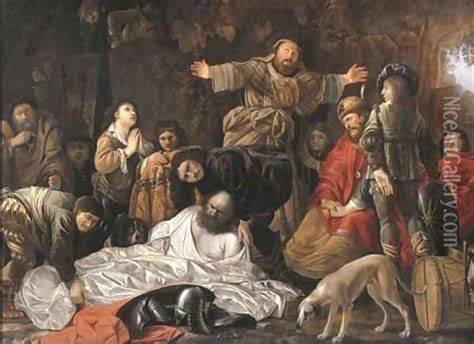 The Humiliation of King Ahab, by Garrett William Horst