I am going to write a post about how I think the elections will turn out tomorrow. And that is scary because I do not have a crystal ball, and I could be wildly wrong in my prediction. I mean, I was wrong in 2016. I could be wrong again.

But I decided I want to write this post anyhow because it is always good to practice stating what I believe and making a case for it, even if it is risky. I’m a philosopher, and arguing is kind of my job. I still find it intimidating sometimes. That’s why I practice.

But writing this post also allows me to talk a little bit about why I love the U.S. and about my dreams for it.

Now, don’t get me wrong. The United States has a lot of faults currently, and it has been responsible for a lot of terrible actions historically. In saying I love the U.S., I don’t deny the reality of past atrocities like Native American genocide, slavery, and the Japanese internment during World War II.

Those are the sins of our past, and we must own them. I also don’t deny the current inequality the U.S. suffers; our declining rates of health and happiness; our obsessively destructive materialism; and the tragedy that we have some of the highest rates of poverty and incarceration of any developed nation. These are unacceptable realities in our nation, and they are problems we must address.

So, I am not unaware of the problems in the U.S. Nevertheless, I am proud of the U.S. because of something I will refer to as our ethos of humanization.

To better understand this ethos, it is helpful to think about our early American colonists.

There were many reasons that colonists came to America, but one of the reasons they came was the pursuit of humanization. 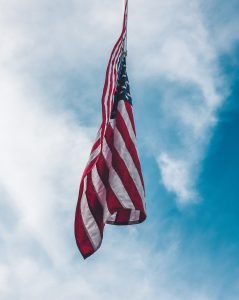 There is a difference between being biologically human and fully becoming a human being. You can be a human being but not live a fully human life.

Living a fully human life means pursuing the development of all your human capacities in relationship with others. For example, humans have the capacity to be logical, emotional, creative, social, aesthetic, spiritual, caring, compassionate, moral, just, and wise, to name just a few of our capacities. Our purpose, our vocation, is to pursue the full development of all these capacities and to create a society and world which supports these capacities as well.

We can only become fully human with each other. This entails that we must continually work to create a society in which people have equal opportunity and in which people are able to build robust, creative, and trusting social bonds together. The more we do this, the more we create a humanized world. This is what it means to pursue humanization.

William Penn, the founder of Pennsylvania, is a good example of this. Penn was a Quaker who faced religious persecution in England. Luckily, Penn was also a friend of the king who bequeathed him some land in America. Penn founded Pennsylvania, and it became a haven for the folks persecuted and oppressed for trying to follow their conscience—the religious and non-religious alike.

Penn was also widely known for treating Native-Americans with respect and forging peaceful relationships with neighboring tribes. He seemed to understand that he could not pursue his own humanization while simultaneously dehumanizing those around him.

Penn is one early exemplar of the U.S. ethos of humanization.

Now certainly there were charlatans, hucksters, sociopaths, and amoral idiots among the colonists, but that was not their overriding character. The early colonists just wanted to breathe, stretch their legs, and create a just and flourishing world together.

And this brings me back to the elections tomorrow and my prediction. Other people have made predictions based on statistics, historical trajectories, or various demographic and social factors. Those folks have made excellent arguments based on such evidence, and I don’t need to repeat their work.

Instead, I would like to make an argument about the elections tomorrow based on the U.S. ethos of humanization. And here it is:

I think that President Trump will lose tomorrow because President Trump does not understand or practice an ethos of humanization. In the past, Trump has sometimes spoken as though he was championing an ethos of humanization (while wildly contradicting it at other times). His tenure as president, however, has continually and increasingly shown that he does not understand this ethos and, in fact, practices an ethos of dehumanization. (You can read about this here, here, and here.)

An ethos of dehumanization holds that some people are better than others; that it’s us against them; that it’s our way or the highway; that winning is the most important thing; and that people are only valuable insofar as they help us win or look good.

An ethos of humanization, on the other hand, recognizes everyone possesses equal dignity; that we’re all in this together; that we must, therefore, listen to and respect each other; that mutual flourishing is the most important thing; and that people are valuable because they have intrinsic worth.

And that is why people will vote Trump out of office. Because even when the U.S. fails to actualize this ethos of humanization, it is still our ideal.

It could be that tomorrow, I will find out this blog post is wildly wrong. If so, I’ll be a bit sheepish. But I will still believe in the U.S. ethos of humanization. I also believe this ethos is the only real ethos, and so it will prevail in the end.

By the way, my discussion of the ethos of humanization is inspired by Paulo Freire, who you can read more about here.