I stand with refugees because I will treat people how I would want to be treated. Last night I attended Stand to Support Refugees at Christ Church in Lexington. The sanctuary was packed, with standing room only and people lined up outside of sanctuary doors. I had the opportunity to listen to refugees from Syria, the Congo, and Iraq speak about their dreams to come to the United States. I listened to them speak about their love for this country. They told us of their sadness and shock as other refugees fleeing for their lives were barred from entering the US as a result of President Trump’s recent band on refugees. Some of these refugees have been waiting for years to come here. 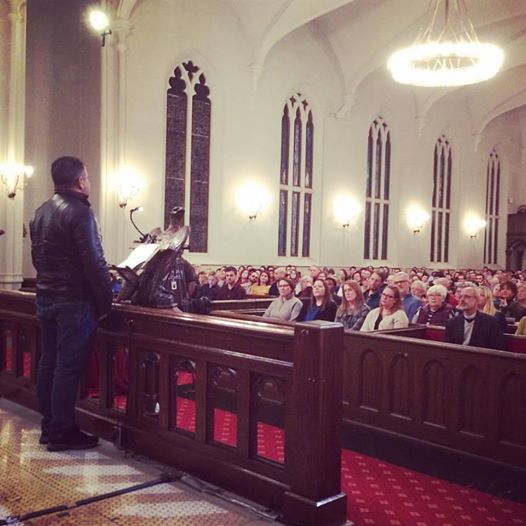 Estabraq, a refugee from Iraq, shares his experience. (This picture is used with permission from my friend Karissa).

Refugees come to the United States because they are facing horrific situations.  Refugees flee their countries because their lives are being threatened by war, genocide, or other religious and ethnic persecution.  Not just any refugee can come to the United States. The United Nations decides which refugees are referred to the United States or another country for resettlement, and the UN only refers 1% of refugees–the most vulnerable ones. Nicole, a refugee from the Congo who works with the Kentucky Refugee Ministries, fled her home with her parents and five sibling because her tribe, the Kasai, was being butchered by members of another tribe.

Muhammed, one of the refugees who spoke at Christ Church in Lexington, told about fleeing from Syria.  He spoke about waking up each morning and seeing women and children and older people lying dead in the streets in pools of blood. Because of several years of bloody Civil War, Syria is experiencing one of the greatest humanitarian crises in history. Millions of people, mostly women and children, have fled from Syria are now refugees seeking a home in other countries. Refugees flee their homes because they do not have a choice. If they stay, they will be tortured, raped, or killed, and their fleeing is an act of desperate self-preservation. 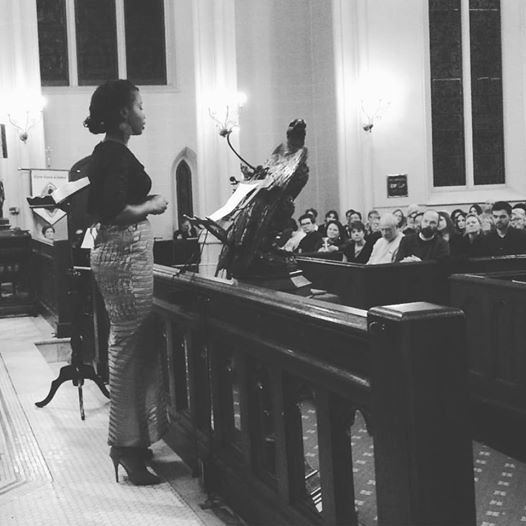 Rosine, a refugee from the Congo, shares her story. (Picture courtesy of Karissa.)

Last night as I listened to the stories of the refugees, I could not help thinking about how I would want to be treated if I was in their situation. My family on both sides is Quaker going back for many generations, and we are immigrants from Scotland and England. Although I cannot be sure of this, I think it is likely that at least some of my ancestors immigrated to the United States to escape religious persecution.

As a part of their religious faith, Quakers refuse to take oaths, they do not fight in wars, and they refuse to acknowledge social hierarchies because they believe everyone is equal before God. They also believe that everyone possesses the light of God within them, and so they tend to rebel against religious dogma and indoctrination. Historically in England, civil leaders did not like Quakers because they often engaged in civil disobedience, and religious leaders did not like them because they thought they were heretics. Quakers were often imprisoned for their beliefs, and many of them were beaten severely in public for these beliefs. Many eventually fled to America.

We are, in fact, a country of immigrants, and one of the bedrock principles of all our religious and ethical systems is that we should treat others the way we would want to be treated. It is very troubling, then, that so many of us are enthusiastically supporting a moratorium/ban on all refugees entering our country, a moratorium that will certainly result in severe suffering of refugees and will very likely result in the death of many of them. This is not how we would want others to treat us.

Of course, people will argue that we have to adopt this moratorium for safety purposes. President Trump has said that we need to scrutinize our system for vetting refugees. This reasoning makes little sense. The United States already has one the most rigorous vetting systems for refugees of any nation. Refugees are subjected to the most intense security scrutiny of any people entering our country. Refugees go through multiple rounds of background checks and biometrical screening, and it can take up to two years for a refugee to gain admittance into the U.S.  Trying to enter the U.S. covertly as a refugee would be one of the least effective and most impractical ways for a terrorist to enter our country.

A great deal of evidence suggests that the threat refugees pose to us is extremely small. The CATO Institute, a libertarian think tank, notes, “Of the 859,629 refugees who have entered the United States since 2001, three have been convicted for planning a terrorist attack abroad and exactly zero have perpetrated domestic attacks.” The likelihood of being killed by a refugee is incredibly low—about 1 in 3.64 billion.  Recent insurance quotes indicate that someone actually has a considerably higher chance of dying by shark attack, a dog attack, being killed by an asteroid or hail, or dying in a car accident. (The chance of someone dying in a car accident is 1 in 100.)

If my house is burglarized, I will certainly take swift and strong measure to secure my windows and doors. However, if I decide to protect myself no matter what it takes, this can lead me to do all sorts of ill-considered actions. I might stop talking to people in my neighborhood and stop helping people I see in need. I might refuse to invite anyone into my house ever again. I may build a huge wall around my house and never leave. I might decide to not talk to any strangers for the rest of my life.

All of these actions might make me safe in the short run. They might prevent people from burglarizing my house. In the grand scheme of things, however, they are excessive, unnecessary, and they undermine my safety. If I cut myself off from others, I have no one to help me when I am in need. I deprive myself of love and relationships. I prevent myself from developing the maturity, compassion, and insight that only comes from taking risks and building relationships with other people who are different from me. When I do this, my house may technically be safe from burglary, but I am in danger of losing those very things that make life worth living. 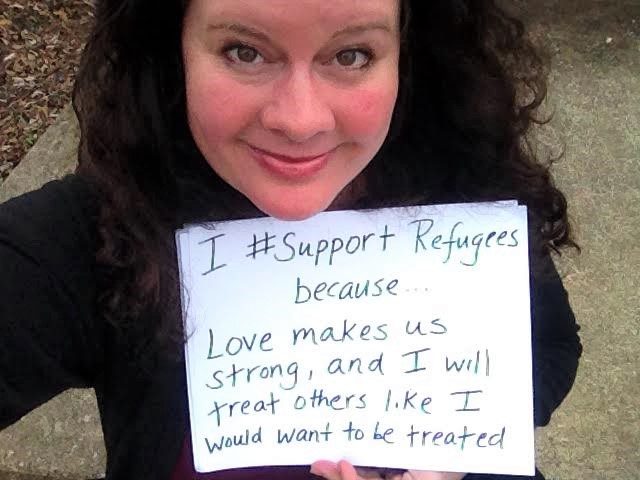 The United States is in danger right now, I believe, but it is not from refugees. It is from ourselves. We have historically been a country that people respect because, ideally, we honor the dignity of all human beings. We are in danger now of losing our best ideals, and I believe we are in danger of losing respect from other countries as well as our own self-respect. There are refugees at our doorstep who are in dire need of our help and our love. We have had a vetting system in place that is one of the most stringent vetting systems in the world, and it has worked so well that the threat of a terrorist refugee killing an American is incredibly low. If we turn refugees away because of fear, we are like the person who walls himself up in his house. When we do this, we have been conquered, but it is not by terrorists, and it is certainly not by refugees. It is by our fear and our own worst selves. Last night I had the chance to proclaim with hundreds of people “No hate, no fear, refugees are welcome here.” This is my hope for our country.

Note: Lexington is the home of Kentucky Refugee Ministries, and they have some helpful suggestions for how we can be allies to people during this crisis.

4 thoughts on “I Stand With Refugees: Why We, and Not Refugees, are the Danger to Ourselves”