By now, you know that Joe Biden picked Kamala Harris, a black woman, as his running mate. What you may not have heard is that President Trump is suggesting that Kamala Harris may not be fit to run for office because he claims she may not have been born in the U.S. (You can read more about this here.)

He is promoting a birther conspiracy, and you may be aware that this is not the first time President Trump has promoted a birther conspiracy. For a good part of President Obama’s tenure in office, Trump frequently suggested that Obama was not a U.S. citizen until he (Trump) was, more or less, backed into a corner during his own presidential campaign and forced to admit Obama was a U.S. citizen. (You can read more about this here.)

At one point, Trump also promoted a birther conspiracy about senator Ted Cruz who is Latino (you can read more about this here).

Rather, Trump is amoral (he has no moral compass), and he thinks you are dumb.

1. Allow fear to rule them instead of reason a moral principles.

2. Regularly view people different from them in any way (especially people of different races and ethnic groups) as inferior and as a threat.

3. Are persuaded by wealthy people with celebrity status, especially if they are white and male. 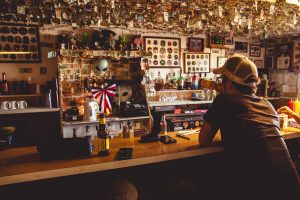 So, when he is opposed by a minority candidate, he riles up white people’s fear of people different from them in order to promote baseless, stupid accusations about those candidates. And unfortunately, as Trump has gambled several times, these tricks are pretty effective with some people.

And he doesn’t care that these conspiracies are lies. (Trump has actually donated to Kamala Harris’ campaigns in the past, which you can read about here.)

That Trump regularly does this–in fact, it is his primary method of motivating people–means that he regularly seeks to influence people in the U.S. by stirring up their basest motives.

A president who does this does not care about you, and he doesn’t care about the U.S. He cares about himself and his own power. And, in fact, a president who is willing to appeal to people’s basest motives to win would absolutely throw you, your family, and the U.S. under a bus in order to serve himself.

And that’s where we find ourselves currently. Under a bus.