This post is about a cat named Izzy who came into our life several years ago. He is a brave kitty, and I think you might like to hear about him. This is his story.

One night we were awakened in the middle of the night by a strange sound right outside of our window. At first it sounded like a baby crying, but as we listened more, we realized the sound was the very high-pitched, plaintive meowing of a cat.

We thought the cat would soon move on and continue his night prowling, so we tried to go back to sleep. But the meowing persisted. It felt like this kitty needed help.

So, we got up, got dressed, and went into our back yard to see what was going on, and that is when we saw a little  kitty sitting by our window meowing. When he saw us, he immediately ran over to us, and my husband (John), who has never met a cat that did not love him, picked him up and started snuggling with and talking to him.

The kitten had a collar but no name tag. He looked clean and thin but not malnourished. Upon closer examination, however, he showed some signs of abuse, and this certainly made us concerned for his well-being.

It was still dark out, so we decided to put some food and water out for him. We thought maybe he was lost and hungry and if we fed him, he’d be able to find his way back home.

So, we fed him and went back to sleep and thought that was the end of it.

When we got up the next morning and went outside, there was Mr. Kitten. He was walking around the backyard checking things out, but I got the impression that he was mainly waiting for us. He was delighted to see us and wanted to be held and snuggled, which we happily obliged.

Since it was the middle of winter and cold, we became increasingly concerned about him. He needed to be inside. Because of the signs of abuse we had noticed previously, we had misgivings about returning him to his previous owners, but we thought we should at least make an attempt to find them.

So, John spent the morning walking around our neighborhood, knocking on doors, trying to discover any details he could about Mr. Kitten. No luck.

Next we posted a notice in a Facebook groups for lost and missing pets in our area. We waited for several hours. No luck.

We thought he might have an embedded chip that would help us find his home, so we took him to the vet. No chip.

We had a growing suspicion that Mr. Kitten had been abandoned or that he was trying to escape an abusive home. We decided that for whatever reason, he had entrusted his fate into our hands. We accepted the responsibility and adopted him as our temporary ward.

I decided he needed a name, and I though he looked like an Izzy. Izzy it was! 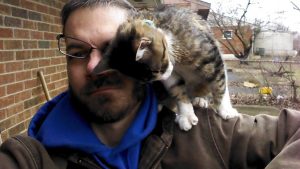 At first we contemplated adopting Izzy as our own kitty, but there was a problem. About a year prior, John and I had adopted a neighborhood stray kitty, Leo, whom John had saved from a vicious dog attack. After the attack, John and I brought Leo inside to nurse him back to health.

We had another kitty, too—Jax—and Jax was not happy about Leo being in the house. We got Jax from a friend who found Jax abandoned as a newborn on her front porch. (We are not sure what happened to Jax’s mom.) Our friend took in Jax, bottle fed him, and saved his life. 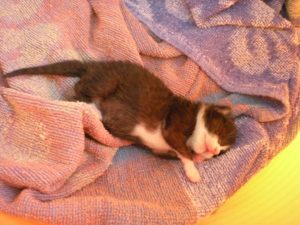 This is a picture of Baby Jax. You’re welcome.

We got Jax when he was about seven weeks old. As you can imagine, Jax is really attached to people. He was also an only kitty for several years. So he was not interested in sharing his space or his people with Leo. 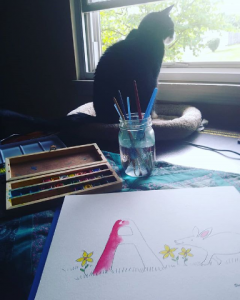 Actually “not interested” is an understatement. Jax HATED sharing his space and people with another cat. 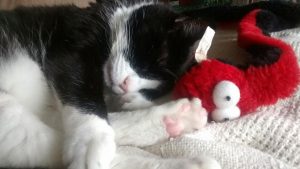 This is our Leo who adjusted pretty quickly to indoor life. He has since passed, but we had five good years with him and hold him in our heart always.

We had to divide the front and back of the house with a gate in our hallway, or Jax would attack Leo. By the time Izzy came along, we had made a little progress with Jax. He and Leo could be in the same room if John or I were there, too, but we had to monitor Jax carefully.

It was a tricky situation, and we knew that bringing Izzy into the mix would have disrupted the tenuous peace we had brokered between Jax and Leo.

So, we decided to tell our Facebook friends about Izzy and see if anyone was interested in giving him a home.

And that is where my friend Colin enters the story.

Colin is my philosophy friend and colleague. He studies ancient philosophy, and we’ve had some pretty cool conversations about Plato’s Symposium, Theaetetus, and Parmenides. Coin wrote his dissertation, among other things, on the concept of Being in several of Plato’s dialogues.

He’s also a musician and has played drums and guitar in several punk bands. 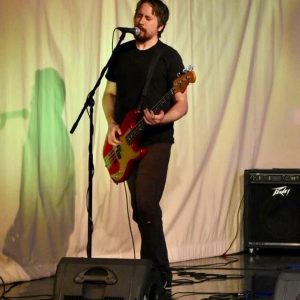 All the following photos are courtesy of Colin.

One of my favorite interesting facts about Colin is that he and some of his friends made a documentary a few years back that won a Sundance Film Festival award. The documentary is called Resurrect Dead, and it’s about the story behind some mysterious tiles called the Toynbee Tiles that you can find all over Philadelphia, as well as some other cities in the U.S. 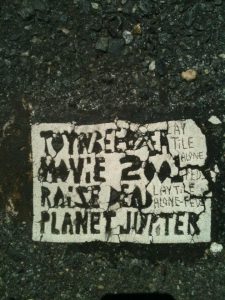 No one knew where these tiles came from…until, that is, Colin and his friends solved the mystery. (You can watch the documentary and read about it here and here.) 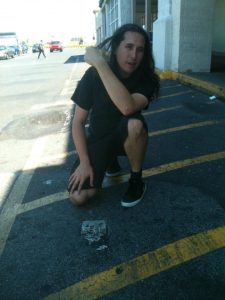 Anyhow, Colin is not only a lover of philosophy, music, and urban mysteries, he also loves cats. When I first met Colin, he had several cats. I was particularly fascinated with how he always seemed to take pictures of them that looked like they were in a cat band posing for the cover of an album.

Colin said he would take Izzy as a foster cat, with the plan of adopting him if he got along okay with the other cats. When we took Izzy to his house, Colin noticed the signs of abuse, too, and he was eager to give Izzy a safe and happy place to live.

So, Izzy went to his temporary foster home, which quickly became his new home.

Izzy fit in right away with his new cat siblings and seemed to adjust without a hitch to his new life.

Izzy lives in Colorado now with Colin and his partner Brittany, and I get regular reports from Colin that he’s doing great and is a sweet kitty who charms everyone. 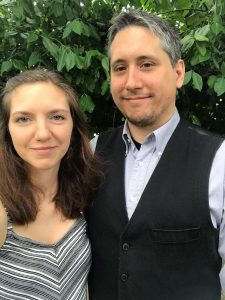 Both Colin and Brittany teach at colleges in Colorado—Colin teaches philosophy, and Brittany teaches Spanish. The last report I got from Colin, Izzy has become a regular visitor during Brittany’s online class. So much so that he now has a class nickname—El Gansito, “The Little Goose”.

John and I love hearing how well Izzy is doing, and we are so happy that we got to be a part of his life story.

When I think of Izzy, he reminds me of an important truth about life: Sometimes life can be hard, and sometimes people will treat you badly.

But there are also so many people out there full of love and generosity who want to help you on your life journey. I think of those people as the Magic People. You deserve to flourish and thrive. Don’t give up. Keep looking for the Magic People. 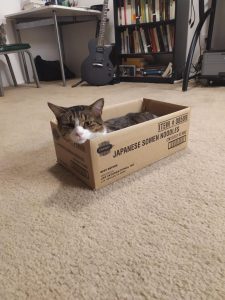 The Truth of Cats

Lessons I Learned from My Kitty Leo

2 thoughts on “The Adventures of Izzy the Cat”